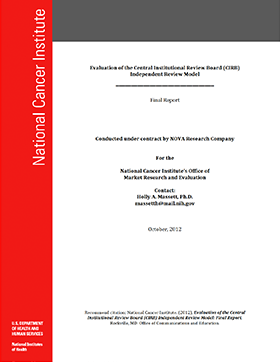 In 2001, NCI launched its Central IRB initiative to streamline the IRB approval process for its adult clinical trials and reduce administrative burden on local IRBs. The primary objective of the CIRB was to reduce local administrative burdens through improved efficiency, while maintaining a high level of human research subject protections. There were approximately 380 signatory institutions involved in the CIRB. NCI’s CIRB process was a “shared responsibility” model: CIRB conducted an initial review and approval of the clinical trial protocol, followed by a subsequent review by the local IRB chair/subcommittee that concentrated on local context issues, called a “facilitated review.” The Association for the Accreditation of Human Research Protection Programs (AAHRPP) recommended NCI change its CIRB review model to an “independent” model (vs. its shared responsibility model), where local IRBs would delegate all regulatory requirements to the CIRB and the CIRB would be the only IRB of record.

To aid NCI’s decision whether to adopt a new “independent” i-CIRB model and invest the substantial resources required for the change, NCI conducted a one-year pilot study and contracted with NOVA to perform an evaluation of the process.

The goals of the CIRB pilot program evaluation were to:

The study enrolled 24 Cooperative Group sites to implement and follow the new model’s processes and commitments (22 of the sites already were using the facilitated model while 2 were not). In parallel, NCI conducted a formal evaluation of the i-CIRB pilot program to measure participants’ satisfaction with the new model and its impact on sites’ workflow during the pilot via surveys. Two methods were used to gather qualitative feedback from participants. First, invitations were emailed to respondents asking them if they would be willing to participate in a 30-minute telephone interview with the NCI evaluation lead to discuss their experiences with the i-CIRB pilot program and any recommendations they might have if NCI were to roll out the program nationally. Second, a review was conducted of the open-ended responses provided by respondents in the endpoint evaluation survey. 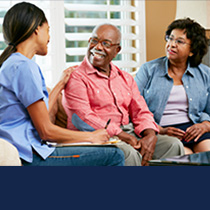 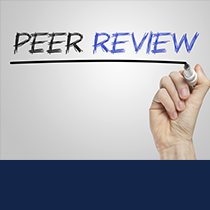 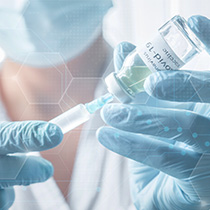